Wall Drug Store, often called simply “Wall Drug,” is a tourist attraction located in the city of Wall, South Dakota. It is ashopping mall consisting of a drug store, gift shop, restaurants and various other stores. Unlike a traditional shopping mall, all the stores at Wall Drug operate under a single entity instead of being individually run stores. The New York Times has described Wall Drug as “a sprawling tourist attraction of international renown [that] takes in more than $10 million a year and draws some two million annual visitors to a remote town.”[1]

The small town drugstore made its first step towards fame when it was purchased by Ted Hustead in 1931. Hustead was a Nebraska native and pharmacist who was looking for a small town with a Catholic church in which to establish his business. He bought Wall Drug, located in a 231-person town in what he referred to as “the middle of nowhere,” and strove to make a living. Business was very slow until his wife, Dorothy, thought of advertising free ice water to parched travelers heading to the newly opened Mount Rushmore monument 60 miles (97 km) to the west. From that time on business was brisk. Wall Drug grew into a cowboy-themed shopping mall/department store. Wall Drug includes a western art museum, a chapel based on the one found at New Melleray Abbey near Dubuque, Iowa, and an 80-foot (24 m) apatosaurus (formerly brontosaurus) that can be seen right off Interstate 90. It was designed by Emmet Sullivan who also created the dinosaurs at Dinosaur Park in Rapid City and Dinosaur World.

Wall Drug earns much of its fame from its self-promotion. Billboards advertising the establishment can be seen for hundreds of miles throughout South Dakota and the neighboring states. In addition, many visitors of Wall Drug have erected signs throughout the world announcing the miles to Wall Drug from famous locations, treating it as a geodesic datum. By 1981 Wall Drug was claiming it was giving away 20,000 cups of water per day during the peak tourist season, lasting fromMemorial Day until Labor Day, and during the hottest days of the summer.

Most of Wall Drug’s advertisement billboards can be found on an approximately 650-mile-long (1,050 km) stretch of Interstate 90 from Minnesota to Billings, Montana. Wall Drug spends an estimated $400,000 on billboards every year. 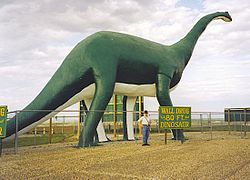 When the United States Air Force was still operating Minuteman missile silos in the western South Dakota plains, Wall Drug used to offer free coffee and donuts to service personnel if they stopped in on their way to or from Ellsworth Air Force Base (50 miles (80 km) west on Interstate 90). Wall Drug continues to offer free coffee and a donut tohoneymooners, veterans, priests, hunters, truck drivers, and other travelers.

Ted Hustead died in 1999. The following day, the governor of South Dakota began his annual State of the State address by commemorating Hustead as “a guy that figured out that free ice water could turn you into a phenomenal success in the middle of a semi-arid desert way out in the middle of someplace.”[1]

In 1981, Wall Drug was featured in Time magazine as one of the largest tourist attractions in the north.[2] In his 1989 book The Lost Continent, Bill Bryson wrote, “It’s an awful place, one of the world’s worst tourist traps, but I loved it and I won’t have a word said against it.”[3] The history of Wall Drug was told in a two-episode story arc of the podcast The Radio Adventures of Dr. Floyd.