Violence has continued to escalate between Palestinian militants and the Israeli military after a rocket was allegedly fired from the Gaza strip, and clashes broke out following the death of a young Palestinian man in a Jerusalem refugee camp.
The Latest: Dozens briefly enter Israel from Gaza
Israeli-Palestinian tensions soar after Gaza rocket lands in Israel
Iron Dome shoots down Palestinian rocket in skies over southern Israel
Israeli-Palestinian violence: Stabbings near Old City; deaths in clashes
LIVE UPDATES: Gaza Rocket Fired at Israel After Two Palestinians Killed at Border
See realtime coverage » 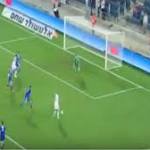 In Israel, A New Battle Over Who Qualifies As Jewish

Who is a Jew? It’s an age-old question that in Israel been determined by government-selected rabbis in the decades since the country was established in 1948.
See realtime coverage »

Given its location, resources and relig