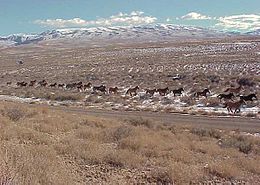 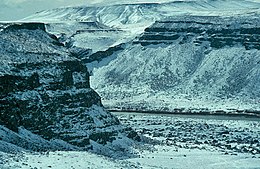 Snow-covered cliffs of Snake River Canyon,Idaho, managed by the Boise District of the BLM

The Bureau of Land Management (BLM) is an agency within the United States Department of the Interior that administers more than 247.3 million acres (1,001,000 km2) of public lands in the United States which constitutes one-eighth of the landmass of the country.[2] President Harry S. Truman created the BLM in 1946 by combining two existing agencies: the General Land Office and the Grazing Service.[3] The agency manages the federal government’s nearly 700 million acres (2,800,000 km2) of subsurface mineral estate located beneath federal, state and private lands severed from their surface rights by the Homestead Act of 1862.[3] Most BLM public lands are located in these 12 western states: Alaska, Arizona, California, Colorado, Idaho, Montana, Nevada, New Mexico, Oregon, Utah,Washington and Wyoming.[4] 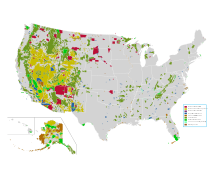 The mission of the BLM is “to sustain the health, diversity, and productivity of the public lands for the use and enjoyment of present and future generations.”[5] Originally BLM holdings were described as “land nobody wanted” because homesteaders had passed them by.[4] All the same, ranchers hold nearly 18,000 permits and leases for livestock grazing on 155 million acres (630,000 km2) of BLM public lands.[6] The agency manages 221 wilderness areas, 23 national monuments and some 636 other protected areas as part of the National Landscape Conservation System totaling about 30 million acres (120,000 km2).[7] There are more than 63,000 oil and gas wells on BLM public lands. Total energy leases generated approximately $5.4 billion in 2013, an amount divided among the Treasury, the states, and Native American groups.[2][8][9]

The BLM’s roots go back to the Land Ordinance of 1785 and the Northwest Ordinance of 1787.[10] These laws provided for the survey and settlement of the lands that the original 13 colonies ceded to the federal government after the American Revolution.[10] As additional lands were acquired by the United States from Spain, France and other countries, the United States Congress directed that they be explored, surveyed, and made available for settlement.[10]During the Revolutionary War, military bounty land was promised to soldiers who fought for the colonies.[11] After the war, the Treaty of Paris of 1783, signed by the United States, England, France, and Spain, ceded territory to the United States.[12][13] In the 1780s, other states relinquished their own claims to land in modern-day Ohio.[14] By this time, the United States needed revenue to function.[15] Land was sold so that the government would have money to survive.[15] In order to sell the land, surveys needed to be conducted. The Land Ordinance of 1785 instructed a geographer to oversee this work as undertaken by a group of surveyors.[15] The first years of surveying were completed by trial and error; once the territory of Ohio had been surveyed, a modern public land survey system had been developed.[16] In 1812, Congress established the General Land Office as part of the Department of the Treasuryto oversee the disposition of these federal lands.[14] By the early 1800s, promised bounty land claims were finally fulfilled.[17]

Over the years, other bounty land and homestead laws were enacted to dispose of federal land.[10][17] Several different types of patents existed.[18] These include cash entry, credit, homestead, Indian, military warrants, mineral certificates, private land claims, railroads, state selections, swamps, town sites, and town lots.[18] A system of local land offices spread throughout the territories, patenting land that was surveyed via the corresponding Office of the Surveyor General of a particular territory.[18] This pattern gradually spread across the entire United States.[16] The laws that spurred this system with the exception of the General Mining Law of 1872 and the Desert Land Act of 1877 have since been repealed or superseded.[19]

In the early 20th century, Congress took additional steps toward recognizing the value of the assets on public lands and directed the Executive Branch to manage activities on the remaining public lands.[19] The Mineral Leasing Act of 1920 allowed leasing, exploration, and production of selected commodities, such as coal, oil, gas, and sodium to take place on public lands.[20] The Taylor Grazing Act of 1934 established the United States Grazing Service to manage the public rangelands by establishment of advisory boards that set grazing fees.[21][22] The Oregon and California Revested Lands Sustained Yield Management Act of 1937, commonly referred as the O&C Act, required sustained yield management of the timberlands in western Oregon.[23]

In 1946, the Grazing Service was merged with the General Land Office to form the Bureau of Land Management within theDepartment of the Interior.[19] It took several years for this new agency to integrate and reorganize.[24] In the end, the Bureau of Land Management became less focused on land disposal and more focused on the long term management and preservation of the land.[19] The agency achieved its current form by combining offices in the western states and creating a corresponding office for lands both east of and alongside the Mississippi River.[25] As a matter of course, the BLM’s emphasis fell on activities in the western states as most of the mining, land sales, and federally owned areas are located west of the Mississippi.[26]

BLM personnel on the ground have typically been oriented toward local interests, while bureau management in Washington are led by presidential guidance.[27] By means of the Federal Land Policy and Management Act of 1976, Congress created a more unified bureau mission and recognized the value of the remaining public lands by declaring that these lands would remain in public ownership.[10] The law directed that these lands be managed with a view toward “multiple use” defined as “management of the public lands and their various resource values so that they are utilized in the combination that will best meet the present and future needs of the American people.”[28]

Since the Reagan years of the 1980s, Republicans have often given priority to local control and to grazing, mining and petroleum production, while Democrats have more often emphasized environmental concerns even when granting mining and drilling leases.[29] In September 1996, then President Bill Clinton used his authority under the Antiquities Act to establish the Grand Staircase-Escalante National Monument in southern Utah, the first of now 20 national monuments established on BLM lands and managed by the agency.[7] The establishment of Grand Staircase-Escalante foreshadowed later creation of the BLM’s National Landscape Conservation System in 2000. Use of the Antiquities Act authority, to the extent it effectively scuttled a coal mine to have been operated by Andalex Resources, delighted recreation and conservation enthusiasts but set up larger confrontations with state and local authorities.[30][31] The changing demographics in the western states have led some to suggest that the BLM, long derided as the “Bureau of Livestock and Mines,” is in the midst of becoming the “Bureau of Landscapes and Monuments.”[3]

Most of the public lands held by the Bureau of Land Management are located in the western states.[32] 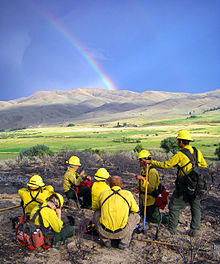 Calm Before the Storm: Fatigued BLM Firefighters taking a break after a fire in Oregon in 2008

Established in 2000, the National Landscape Conservation System is overseen by the BLM.[50] The National Landscape Conservation System lands constitute just about 12% of the lands managed by the BLM.[50] Congress passed Title II of the Omnibus Public Land Management Act of 2009 (Public Law 111-11) to make the system a permanent part of the public lands protection system in the United States.[50][51] By designating these areas for conservation, the law directed the BLM to ensure these places are protected for future generations, similar to national parks and wildlife refuges.[50] 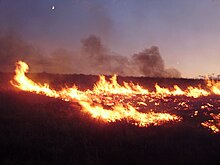 Lightning-sparked wildfires are frequent occurrences on BLM land in Nevada.

Uniformed rangers enforce laws and regulations governing BLM lands and resources.[56] As part of that mission, these BLM rangers carry firearms, defensive equipment, make arrests, execute search warrants, complete reports and testify in court.[56] They seek to establish a regular and recurring presence on a vast amount of public lands, roads and recreation sites. They focus on the protection of natural and cultural resources, other BLM employees and visitors.[56] Given the many locations of BLM public lands, these rangers use canines, helicopters, snowmobiles, dirt bikes and boats to perform their duties.[56] 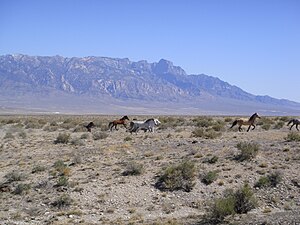 The BLM manages free-roaming horses and burros on public lands in ten western states.[58] Though they areferal, the agency is obligated to protect them under the Wild and Free-Roaming Horses and Burros Act of 1971(WFRHBA).[58] As the horses have few natural predators, populations have grown substantially.[58] WFRHBA as enacted provides for the removal of excess animals; the destruction of lame, old, or sick animals; the private placement or adoption of excess animals; and even the destruction of healthy animals if range management required it.[59][60] In fact, the destruction of healthy or unhealthy horses has almost never occurred.[61] Pursuant to the Public Rangelands Improvement Act of 1978, the BLM has established 179 “herd management areas” (HMAs) covering 31.6 million acres (128,000 km2) acres where feral horses can be found on federal lands.[58]

In 1973, BLM began a pilot project on the Pryor Mountains Wild Horse Range known as the Adopt-A-Horse initiative.[62] The program took advantage of provisions in the WFRHBA to allow private “qualified” individuals to “adopt” as many horses as they wanted if they could show that they could provide adequate care for the animals.[63] At the time, title to the horses remained permanently with the federal government.[60] The pilot project was so successful that BLM allowed it to go nationwide in 1976.[62] The Adopt-a-Horse program quickly became the primary method of removing excess feral horses from BLM land given the lack of other viable methods.[63] The BLM also uses limited amounts of contraceptives in the herd, in the form of PZP vaccinations; advocates say that additional use of these vaccines would help to diminish the excess number of horses currently under BLM management.[64]

Despite the early successes of the adoption program, the BLM has struggled to maintain acceptable herd levels, as without natural predators, herd sizes can double every four years.[58] As of 2014, there were more than 49,000 horses and burros on BLM-managed land, exceeding the BLM’s estimated “appropriate management level” (AML) by almost 22,500.[58]

In 2009, BLM opened Renewable Energy Coordination Offices in order to approve and oversee wind, solar, biomass, and geothermal projects on BLM-managed lands.[46] The offices were located in the four states where energy companies had shown the greatest interest in renewable energy development: Arizona, California, Nevada, and Wyoming.[46]