Poll: 2 Out of 3 Americans Say Focus On Mental Health, Not Gun Control 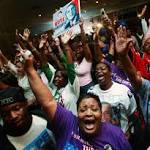 African Americans say that their lives are worse off during President Barack Obama’s second term than during his first four years in the White House, a newGallup Poll released Thursday says. In a “well-being” poll conducted by Gallup and Healthways, ..