About 50 concerned citizens attended a forum to discuss plans to run a fracked gas pipeline through towns in Connecticut, including Guilford.

OIL AND GAS: Promise of fracking sprouts opposition in England

SHEFFIELD, England — Political leaders at Westminster are rolling out the red carpet for shale gas development, eager for the kind of domestic energy boom that has rocked the United States. 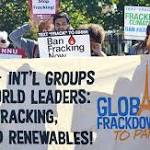 Victory in the European Parliament: A U-turn On Fracking!

Following the events in Ukraine and the increased reliability of European gas imports from Russia, a conservative Polish Member of the European Parliament, Marek Gróbarczyk, had written a draft of the report, which sang the praises of fracking.