Facts about the Syrian Refugees

The Paris bombings and other recent terrorist attacks have given rise to a political debate within the United States about the Obama administration’s plan to admit Syrian refugees.
Editorial: Caution but reason on Syrian refugees
Here’s why the US should accept refugees
See realtime coverage »

In dueling TV ads, foes of the federal ethanol mandate claim that it “doubles greenhouse gas emissions,” while the ethanol lobby says that “the oil industry is lying” and the mandate will lead to lower emissions.
See realtime coverage » 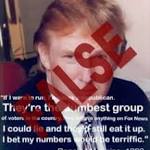 Q: Did Donald Trump tell People magazine in 1998 that if he ever ran for president, he’d do it as a Republican because “they’re the dumbest group of voters in the country” and that he “could lie and they’d still eat it up”?

Sanders on Climate Link to Terrorism

Sen. Bernie Sanders went too far with his debate claim that “climate change is directly related to the growth of terrorism.” One study concluded that man-made climate change likely worsened a drought in Syria and contributed to instability there.
Climate Change Archives » EcoWatch
See realtime coverage » 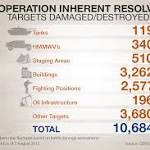