Paris (AFP) – France’s far-right National Front (FN) appears to be on course for an historic breakthrough in regional elections this weekend, with the country still traumatised by last month’s Paris terror attacks.

The party’s leader Marine Le Pen looks set to take the former Socialist heartland in the economically depressed northern region of Nord-Pas-de-Calais-Picardie, while her 25-year-old niece Marion Marechal-Le Pen is ahead in the race for the vast southeastern region that includes the French Riviera.

The anti-Muslim, anti-immigrant FN — which has never before controlled a region — has been climbing in the polls since 130 people were killed by jihadist gunmen and bombers in Paris on November 13.

With the FN’s support soaring to between 27 and 30 percent across the country, the party is also in a close fight with the traditional right for the northwestern region of Normandy and Burgundy and Franche-Comte in the east.

“Several months ago I said we could win four or five regions, and so it is,” Marine Le Pen told AFP with a week to go before the first round of voting on Sunday.

This week, two local newspapers in the north have taken the unusual step of running attacks on Le Pen and her party, questioning their competence to rule. 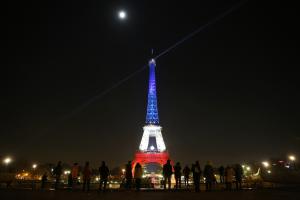 Le Pen dismissed the front pages of La Voix du Nord and Nord Eclair dedicated to the party she inherited from her father, Jean-Marie Le Pen, as little more than “tracts” in support of the ruling Socialist party.

Former prime minister Francois Fillon said the far-right “are gaining because French people are angry”, and warned that if the party was able to get a stranglehold on a region it would “help destabilise the country”.

Opinion polls since the Paris attacks have shown the Front appear to be benefiting, particularly from the revelation that two of the suicide bombers slipped into Europe through Greece with a wave of migrants over the summer.

But the head of the Socialist party, Jean-Christophe Cambadelis, was more bullish, claiming “the polls are not showing the support for the Front but measure fear in France — and it is fear that is boosting party.”

“The National Front have benefited from the attacks with the message, ‘We told you so,” said Jean-Francois Doridot, of the polling company Ipsos.

In the wake of the carnage, the approval ratings of the Socialist President Francois Hollande have surged up to around 50 percent, the highest since shortly after his election in 2012.

But the credit the public are giving Hollande for his hardline approach since the carnage has not helped his party.

While the Socialists have played the national unity card after the attacks, France’s stubbornly high unemployment rate of 10.8 percent is hurting them on the doorsteps.

The party won control of all but one of the regions in historic gains in 2010, but may be left holding only three after the second round of voting on December 13.

Polls put them on 22 to 26 percent in the first round ballot, but much will depend on whether they can strike deals with the right-wing Republicans to keep the FN out.

Analysts warn three-way fights in the second round risk letting the FN in, but opposition chief and former president Nicolas Sarkozy has ruled out any “grand coalition” for second-round run-offs scheduled for December 13.

Such a move would be “a favour for Madame Le Pen” and give credance to the idea that “the only alternative to the Socialists is the National Front,” Sarkozy told radio station Europe 1 Wednesday.

Before the Paris attacks, Sarkozy’s party The Republicans seemed to in pole position to take advantage of the government’s unpopularity.

But a combination of tensions within the party, the FN’s continued rise, and Hollande’s adoption of much of their tough stance on terror has left them hovering between 25 and 28 percent in the polls.

The vote is the last major electoral test before the presidential battle in 2017.