From Wikipedia, the free encyclopedia
This article is about the comic strip. For other uses, see Red Ryder (disambiguation).

Red Ryder was a popular long-running Western comic strip created by Stephen Slesinger and artist Fred Harman. Beginning Sunday, November 6, 1938, Red Ryder was syndicated by Newspaper Enterprise Association, expanding over the following decade to 750 newspapers, translations into ten languages and a readership in the United States of 14 million. The 26-year run of the strip came to an end in 1964.

Harman was on a Colorado ranch when he decided to draw a comic strip. He headed for Hollywood in the early 1930s, borrowed some money and began Bronc Peeler, which he syndicated himself. Bronc Peeler was a rough cowboy who fought bandits and rustlers with the help of his pal, Coyote Pete. Harman’s rough-hewn art style had a dramatic appeal, but his characters, who killed animals and people, coupled with the affected use of slang and thin storylines, were not in keeping with the content standards needed for wide syndication.

In 1938, when Harman met publisher/comic syndicator Slesinger, he headed toward happier trails. Slesinger brought Harman to New York and worked with him for a year before Red Ryder was ready to be syndicated. Slesinger then embarked on a successful campaign of merchandising and licensing with a seemingly endless parade of comic books, Big Little Books, novels, serial chapters, radio programs, events, rodeos, powwows, commercial tie-ins, and licensed products such as the Daisy Red Ryder BB Gun, which remains the longest-continuous license in the history of the global licensing industry[citation needed]. The appeal of the Daisy Red Ryder BB Gun to youngsters was depicted in the Christmas classic film A Christmas Story, adapted from the autobiographical fiction of Jean Shepherd, by permission of Red Ryder Enterprises, Inc., which owns the Red Ryder trademarks and copyrights.[1] 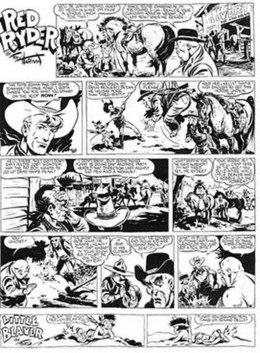 Astride his mighty steed Thunder, Red was a tough cowpoke who lived on Painted Valley Ranch in the Blanco Basin of the San Juan Mountain Range with his aunt, the Duchess, and his juvenile Native-American sidekick, Little Beaver, who rode his horse, Papoose, when they took off to deal with the bad guys. Little Beaver spoke in the pidgin Englishnow considered an offensive caricature. (Example: “Spinach heap good. Me like’m!”) Other notable characters were ranch hand Buckskin Blodgett, Red’s gal pal Beth, and bad guy Ace Hanlon.

Harman was eventually acclaimed as one of the finest Western pen-and-ink artists, known for his dramatic sense of perspective and authentic action. Contributing artists and writers worked on the strip over the years, including Stephen Slesinger who scripted and approved all of the stories until his death in 1953; Jim Gary, Edmund Good, John Wade (“Johnnie”) Hampton, Robert MacLeod, and Bill Lignanti (of The Palm Restaurant fame). Charlie Dye, Johnnie Hampton, Joe Beeler, and George Phippen were co-founders of the Cowboy Artists of America of which Harman was also a charter member. When Harman left Red Ryder in 1963 to concentrate on his paintings, MacLeod continued writing the story continuity for the strip, with staff artists of Red Ryder Entp., Inc.

Gaylord DuBois, a prolific comic book writer associated with Slesinger, scripted Red Ryder and Little Beaver for a short period in 1938 and again in the early 1940s. 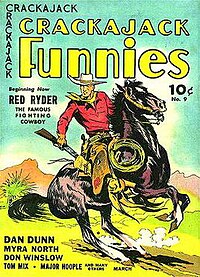 The first Red Ryder comic book was published by Slesinger’s Hawley Publications, Inc. in September 1940, followed by Hi-Spot comics for one issue. Dell Comics launched its Red Ryder in August 1941, changing its title to Red Ryder Ranch Magazine with #145, and then to Red Ryder Ranch Comics with #149. Red Ryder Comics consisted of reprints of the newspaper strip until issue #47 (June 1947), when it began producing original material. Altogether, the title ran for a total of 151 issues, ending in 1957, one of the longest continuous newsstand runs of any Western comic.[2]

The Red Ryder radio series began February 3, 1942, on the Blue Network.[3] broadcast three times a week at 7:30pm Pacific time. When the Blue also acquired The Lone Ranger from the Mutual Broadcasting System, Mutual decided to compete by airing Red Ryder in the same time period. Thus, Red Ryder aired on the East Coast that year from May 20 to September 9 on Mutual. The series beat The Lone Ranger in the Hooper ratings, but the success was short-lived. Red Ryder was sold to a regional sponsor, Langendorf Bread, and after four months was no longer heard in the East.

Mutual and Langendorf continued the series on the West Coast Don Lee Network through the 1940s at 7:30pm on Tuesdays, Thursdays, and Saturdays, always with the familiar organ theme, “The Dying Cowboy” (“Bury Me Not on the Lone Prairie“). Announcers on the show included Ben Alexander and Art Gilmore.

Billed as “America’s famous fighting cowboy,” Red Ryder was notable because he usually did not kill his enemies but instead aimed for the hand to disarm them. Such sound effects were handled by James Dick, Monty Fraser, and Bob Turnbull.

Red Ryder appeared in more than 35 movies and serials. They began in 1940 with the 12-chapter Republic movie serial The Adventures of Red Ryder, played byDon “Red” Barry, who got his nickname “Red” from the role and Tommy Cook as Red Ryder’s young Indian sidekick Little Beaver. Subsequently Wild Bill Elliott andAllan “Rocky” Lane portrayed Red Ryder in a number of films, both working with Robert Blake as Little Beaver. The last four Red Ryder movies starred Jim Bannonas Red Ryder and Don Kay (“Little Brown Jug”) Reynolds as Little Beaver. All four of these movies were done in color. Both Bannon and Lane filmed pilots for a Red Ryder television series, but neither version sold. Both pilots survive and appear on various western DVD collections.