North Liberty (United States) (AFP) – Democratic presidential frontrunner Hillary Clinton on Sunday urged Iowa voters to choose her experience over the idealism of rival Bernie Sanders, who made the rounds of university campuses at the weekend to earn student support.

“I know some of you are still shopping. I’d like to shop too. I hope during the course of this afternoon to convince some of you,” Clinton told about 600 people packed into an elementary school gym in the town of North Liberty.

On February 1, voters in Iowa, in the US heartland, will cast the first ballots in the US presidential nominations process — a long road to Election Day on November 8.

Clinton, the 68-year-old former secretary of state, and Sanders, a 74-year-old senator from Vermont, are running neck-and-neck in some opinion polls, though Clinton enjoys a wide advantage on a nationwide basis.

“As secretary of state, she stared down some of the toughest dictators in the world, and so I have no doubt that she can take on the Tea Party, and the gun lobby,” said Cecile Richards, president of Planned Parenthood, the influential US women’s health care provider.

“She never blinks, she never wavers.”

The message Clinton and her team sought to drive home was that her proposals are more realistic than those of Sanders, a self-proclaimed democratic socialist who has put taking down the financial elite and Wall Street at the heart of his campaign. 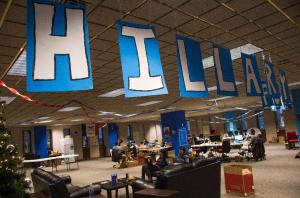 He has repeatedly attacked Clinton over what he says are her close ties to some big banks, and has chastised her for giving paid speeches to Wall Street firms.

But Clinton fought back Sunday.

“I have taken on Wall Street for years!” she said. “I have a better plan to do it.”

She also insisted on her foreign policy bona fides and the “very specific steps” she would take to defeat the Islamic State jihadist group.

Clinton devoted a long section of her stump speech to her role in the Osama bin Laden raid in 2011, which several of President Barack Obama’s aides considered to be too dangerous and risky. She said she encouraged Obama to go ahead with it.

“The person who sits in that (White House) situation room has to be able to weigh intelligence and evidence to be able to really dig deep in these details, and I offer you my experience and my judgment,” she said.

“We need to chart a steady course,” she concluded — suggesting that a Sanders administration would lack such stability.

Her candidacy on Monday got the backing of The Boston Globe, a newspaper with thousands of subscribers in New Hampshire, which follows Iowa next month as balloting gets underway to choose the two major parties’ presidential nominees.

“This is Clinton’s time and the Globe enthusiastically endorses her,” the daily wrote.

Over the weekend, she got the endorsement of The Des Moines Register, Iowa’s largest circulation daily.

In a speech at the University of Northern Iowa in Cedar Falls, Sanders hammered home his call for a “political revolution,” recalling how at first, he was deemed a “fringe candidate” — not a serious challenger to Clinton.

“Well, my friends, a lot has happened in nine months,” he said.

In an effort to assuage any doubts about voting for him in November, Sanders offered up poll data suggesting he could beat Republican frontrunner Donald Trump in the general election by a wider margin than Clinton would.

“In a general election, Republicans win when people are demoralized, when people do not vote and the voter turnout is low,” he said.

“Any objective assessment of our campaign versus Secretary Clinton’s campaign will tell you that the energy, the excitement is with our campaign.”

The speech was his eighth of the weekend, three of them on college campuses.

“All my friends are really into him. There was a punk rock show at the Octopus on Hill Street called ‘Shred for Bernie,’ and everybody I knew was there — it was a big event,” Cady said.