From Wikipedia, the free encyclopedia
For other uses, see Billy the Kid (disambiguation).

His first arrest was for stealing food in late 1875, and five months later he was arrested again for stealing clothing and firearms. His escape from jail two days later and flight from New Mexico Territory into Arizona Territory made him both an outlaw and a fugitive. After murdering a blacksmith during an altercation in August 1877, Bonney became a wanted man in Arizona Territory and returned to New Mexico, where he joined a group of cattle rustlers. He took part in the Lincoln County War and joined the Regulators, making him a well-known outlaw in the region. In April 1878, however, the Regulators killed three men, including Lincoln County Sheriff William J. Brady and one of his deputies. Bonney and two other Regulators were later charged with killing all three men.

Bonney’s notoriety grew in December 1880 when the Las Vegas Gazette in Las Vegas, New Mexico, and the New York Sun carried stories about his crimes.[4] He was captured by Sheriff Pat Garrett later that same month, tried and convicted of the murder of Sheriff Brady in April 1881, and was sentenced to hang in May of that year. Bonney escaped from jail on April 28, 1881, killing two sheriff’s deputies in the process, and evaded capture for more than two months. Bonney was ultimately shot and killed by Garrett in Fort Sumner on July 14, 1881. Over the next several decades, legends grew that Bonney had not died that night, and a number of men claimed to be him.

Henry McCarty was born in New York City on September 17, 1859 to Catherine (née Devine) McCarty, and was baptized eleven days later in the Church of St. Peter.[a] While some historians believe that his father’s first name was Patrick, others have doubts as to his true identity. There has been confusion about McCarty’s birthplace and birth date among historians.[6][7][8] His younger brother, Joseph McCarty, was born in 1863.[9]

Following the death of her husband, Catherine McCarty and her sons moved to Indianapolis, Indiana, where she met a man named William Henry Harrison Antrim. The McCarty family, along with Antrim, moved to Wichita, Kansas in 1870.[10] After moving again a few years later, Catherine married Antrim on March 1, 1873 at the First Presbyterian Church in Santa Fe, New Mexico; both McCarty and his brother Joseph were witnesses.[11][12] Shortly after, the family moved from Santa Fe to Silver City, New Mexico. Joseph McCarty took his stepfather’s surname; becoming known as Joseph Antrim.[9] Catherine McCarty died of tuberculosis on September 16, 1874.[13]

McCarty went to work in a boardinghouse for room and board when Sarah Brown, the establishment’s owner, took him in after his mother’s death. Leaving the arrangement a year later, McCarty began his criminal career by stealing food on September 16, 1875.[14][15] Ten days later, McCarty and a friend, George Schaefer, took part in the robbery of a Chinese laundry. Having stolen clothing and two pistols, McCarty was charged with theft and put in jail. Escaping two days later, this was the beginning of his life as a fugitive from the law.[14] His escape was recorded in the Silver City Herald the next day, the first story published about him. After finding his stepfather and staying with him for a time, McCarty was evicted from Antrim’s home but first took clothes and guns from Antrim’s room. It was the last time the two would see each other.[16]

Following his escape, McCarty fled to Arizona Territory and was hired as a ranch hand by well-known rancher, Henry Hooker.[17][18] In 1876, McCarty settled in southeastern Arizona, where he worked on ranches and spent time in local gaming houses.[19] During this time, he became acquainted with John R. Mackie, a Scottish-born former cavalry private and criminal.[20] The two men became horse thieves. Stealing horses from local soldiers, McCarty became known as “Kid Antrim” because of his youth, slight build, clean-shaven appearance, and personality.[21][22]

On August 17, 1877, McCarty shot Francis “Windy” Cahill in Arizona after the two had a verbal argument and altercation. Also known as “Frank”, Cahill was a blacksmith at Camp Grant, a U.S. Army post in southeastern Arizona’s Graham County. Reportedly, Cahill frequently would demean McCarty. The event that led to the blacksmith’s death began when, in the midst of a poker game, Cahill called McCarty a pimp. When he retorted by calling Cahill a “son of a bitch”, McCarty found himself thrown to the floor and attacked by Cahill. After hitting his opponent while the pair struggled over McCarty’s revolver, Cahill was shot by McCarty. A witness was heard to state, in McCarty’s defense, “[Billy] had no choice; he had to use his equalizer.” Cahill died the following day.[23][24]

Following the shooting, McCarty was taken into custody and held in the Camp Grant guardhouse. Escaping before law enforcement could arrive, McCarty fled on a stolen horse.[25]

On the run following Cahill’s death and leaving Arizona Territory for New Mexico Territory,[26] McCarty had his horse stolen by Apaches. This forced him to walk miles to the nearest settlement, ending up in Pecos Valley, New Mexico.[27] Once in Pecos Valley, McCarty went to the home of friend and Seven Rivers Warriors gang member, John Jones. By the time he arrived, McCarty was half starved and near death as a result of his long trek, but was nursed back to health by Jones’ mother, Barbara.[28][29] After leaving the Jones home, McCarty next arrived at Apache Tejo, a former army post, where he joined a band of rustlers who raided herds owned by cattle magnate John Chisum. After McCarty was spotted in Silver City by a resident, his involvement with the gang was mentioned in a local newspaper.[30] 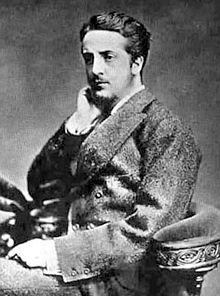 Following his return from Arizona to New Mexico, Bonney went to work for English businessman John Tunstall as a cowboy at his Lincoln County, New Mexico ranch located near Rio Felix, a tributary of the Rio Grande. Along with local lawyerAlexander McSween, Tunstall presented opposition to the economic and political hold over Lincoln County by three businessmen and gunmen: Lawrence Murphy, James Dolan, and John Riley. Since the early 1870s, the trio’s influence was, in part, due to their ownership of the beef contract with nearby Fort Stanton and a well-patronized dry-goods store in the town of Lincoln. As the conflict between the two factions escalated, it became known as the Lincoln County War.[31]

When Tunstall was bothered by rustlers who got the local sheriff to attach nearly US$40,000 of Tunstall’s property and livestock,[32] he changed the focus of Bonney’s position from cowboy to guard. In February 1878, local proprietors and law enforcement supporting Dolan, Murphy, and Riley obtained a court order that allowed them to seize horses owned by Tunstall to satisfy an outstanding debt. Refusing to surrender the horses, Tunstall had Bonney take nine of his prime horses to Lincoln for safekeeping. Meanwhile, Lincoln County Sheriff William Brady put together a large posse to seize Tunstall’s horses.[33]