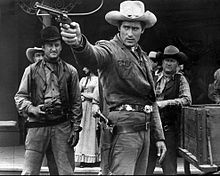 Cheyenne is an American western television series of 108 black-and-white episodes broadcast on ABC from 1955 to 1963. The show was the first hour-long western, and in fact the first hour-long dramatic series of any kind, with continuing characters, to last more than one season. It was also the first series to be made by a major Hollywood film studio which did not derive from its established film properties,[4] and the first of a long chain of Warner Brothersoriginal series produced by William T. Orr.

The series began as a part of Warner Brothers Presents, a program that alternated three different series in rotation. In its first year, Cheyenne traded broadcast weeks with Casablanca and Kings Row.[5] Thereafter, Cheyenne was overhauled by new producer Roy Huggins and left the umbrella of WBP. The show starred Clint Walker, a native ofIllinois, as Cheyenne Bodie, a physically large cowboy with a gentle spirit in search of frontier justice who wanders theAmerican West. The first episode, about robbers pretending to be Good Samaritans, is titled “Mountain Fortress” and features James Garner (who had briefly been considered for the role of Cheyenne) as a guest star, but with higher billing given to Ann Robinson as Garner’s intended bride. The episode reveals that Bodie’s parents were massacred by Indians, the tribe of which is unknown. He was found by Cheyenne Indians, who then reared him. In the series the character Bodie maintains a positive and understanding attitude toward the Native Americans despite the slaughter of his parents.

Cheyenne ran from 1955 to 1963, except for a hiatus when Walker went on strike for better terms (1958–1959); among other demands, the actor wanted increased residuals, a reduction of the 50-percent cut of personal appearance payments that had to be turned over to Warner Brothers, and a release from the restriction of recording music only for the company’s own label.[6] The interim saw the introduction of a virtual Bodie-clone called Bronco Layne, played by Ty Hardin, born in New York City but reared in Texas. Hardin was featured as the quasi main character during Bodie’s absence. When Warners renegotiated Walker’s contract and the actor returned to the show in 1959, Bronco was spun off as a show in its own right and became independently successful.

For most of their runs, Cheyenne, Bronco, and Sugarfoot, starring Will Hutchins, alternated in the same time slot.Cheyenne was the senior partner of the three. Only a snippet of the Bronco theme song was heard in the opening credits, as a kind of aural footnote to that of Cheyenne. Occasionally Cheyenne, Bronco, and Sugarfoot appeared together in the same episode of each other’s series. In the 1961 Cheyenne episode “Duel at Judas Basin,” Walker, Hardin, and Hutchins join forces to stop a trapper (Jacques Aubuchon) from selling guns to the Sioux Indians. The trapper has also framed Tom “Sugarfoot” Brewster of murder.[7]

Even after returning to the program — having been prohibited from seeking other work during the long contract negotiation — Walker was unhappy to continue to play a role which he felt he had already exhausted. He told reporters that he felt like “a caged animal.”[6] Though Cheyenne aired for seven years, the series made only 108 episodes because it was in repeated alternation with other programs and was out of production during Clint Walker’s contract dispute.

At the conclusion of the sixth season, a special episode was aired, “A Man Named Ragan”, the pilot for a program called The Dakotas, starring Larry Ward, Chad Everett, Jack Elam, and Michael Greene, that was to have replacedCheyenne in the middle of the next season. However, because Cheyenne Bodie never appeared in “Ragan”, the two programs are only tenuously linked.[2]

Walker reprised the Cheyenne Bodie character in 1991 for the TV-movie The Gambler Returns: The Luck of the Drawand also played Cheyenne in an episode of Kung Fu: The Legend Continues in 1995.

In its last season, Cheyenne still drew good enough ratings to force the cancellation of the new comedy/drama It’s a Man’s World on NBC, co-starring Glenn Corbett, Michael Burns, Ted Bessell, and Randy Boone. In the spring of 1960, Cheyenne outdistanced singer Kate Smith‘s return to television on CBS‘s The Kate Smith Show, which was canceled after some six months on the air.

As of September 2015, Cheyenne is shown twice every weekday on the Encore western channel. Cheyenne episodes with the Bronco character airs on COZI TV.

Warner Home Video has released the first season on DVD in Region 1. Seasons 2-7 have been released via their Warner Archive Collection. These are manufacture-on-demand (MOD) releases on DVD-R discs. The seventh and final season was released on November 12, 2013.[10]

Cheyenne was a co-winner of the 1957 Golden Globe Award for Television Achievement.[11]