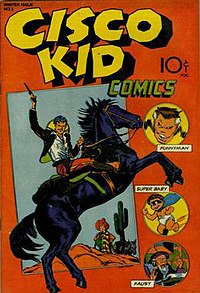 First issue of The Cisco Kid

The Cisco Kid is a fictional character found in numerous film, radio, television and comic book series based on the fictional Western character created by O. Henry in his 1907 short story “The Caballero’s Way”, published in the collection Heart of the West, as well as in Everybody’s Magazine, v17, July 1907. In movies and television, the Kid was depicted as a heroic Mexicancaballero, even though he was originally a cruel outlaw.

In O. Henry’s original story, the character is a 25-year-old desperado in the Texas–Mexico border country who bears little resemblance to later interpretations of the character. He kills for sport and is responsible for at least eighteen deaths. His real name is possibly Goodall (“This hombre they call the Kid—Goodall is his name, ain’t it?”); no first name is given in the story. The Kid’s mixed-ancestry girlfriend, Tonia Perez, both fears and loves him. When Texas Ranger Lieutenant Sandridge arrives at her home, seeking news of the Cisco Kid, they fall in love. Sandridge begins visiting twice a week. Eventually the Kid visits Tonia’s house and finds them together:

Ten yards from his hiding-place, in the shade of the jacal, sat his Tonia calmly plaiting a rawhide lariat. So far she might surely escape condemnation; women have been known, from time to time, to engage in more mischievous occupations. But if all must be told, there is to be added that her head reposed against the broad and comfortable chest of a tall red-and-yellow man, and that his arm was about her, guiding her nimble small fingers that required so many lessons at the intricate six-strand plait.

He overhears Tonia tell Sandridge that she heard the Kid was in the area, and that she assumes the Kid will visit her soon. She says she will send Sandridge word of the Kid’s whereabouts by Gregorio, “the small son of old Luisa,” in time for Sandridge to ride off with a posse, find the Kid and kill him. Sandridge departs and shortly the Kid appears, pretending he has just arrived. The Kid sends a message to Sandridge through Domingo Sales, who claims that Gregorio is “too ill of a fever to ride”. The message says that the Kid has arrived and explains that the Kid has exchanged clothes with Tonia to foil pursuers. Sandridge returns to Tonia’s home and sees two figures in the moonlight: one in men’s clothing and the other in women’s. The one in men’s clothing rides away. Assuming this to be Tonia, Sandridge ambushes and shoots the remaining figure. The victim is Tonia, the Kid having tricked Sandridge into killing his girlfriend.

For his portrayal of the Kid in the early sound film In Old Arizona (1928), Warner Baxter won the second Best Actor Oscar. This film was a revised version of the original story, in which the Kid is portrayed in a positive light. It was directed by Irving Cummings and Raoul Walsh, who was originally slated to play the lead until a jackrabbit jumping through a windshield cost him an eye while on location.[1] In 1931, Fox Film Corporation produced a sound version with Baxter, Conchita Montenegro, and Edmund Lowe.

The movie series began with The Return of the Cisco Kid (1939), featuring Baxter in the title role with Cesar Romero as his sidekick, Lopez, Chris-Pin Martin as the other sidekick, Gordito (“Fatty”), Lynn Bari as his mistaken love interest, Ann Carver, Henry Hull as her wayward grandfather, and Ward Bond in the lowest-billed role as “Tough”, whose one scene shows him beaten into unconsciousness by the unscrupulous Sheriff McNally (Robert Barrat).

Romero took over the lead role of Cisco and Martin continued to play Gordito in six further films before the series was suspended with America’s entry into World War II in 1941. Duncan Renaldo took over the reins as the Kid when Monogram Pictures revived the series in 1945 with The Cisco Kid Returns, which also introduced the Kid’s best-known sidekick, Pancho, played by Martin Garralaga. Pancho also became established as his sidekick in other media. Neither Gordito nor Pancho is in the original story. After three Renaldo/Cisco films, Gilbert Roland played the character in a half-dozen 1946-1947 movies beginning with The Gay Cavalier (1946). Renaldo then returned to the role with Leo Carrillo as Pancho. They made five films, with Renaldo assuming the flowery “Cisco” outfit in the final film. He would wear that throughout the TV series that followed.

The Cisco Kid came to radio October 2, 1942, with Jackson Beck in the title role and Louis Sorin as Pancho. With Vicki Vola and Bryna Raeburn in supporting roles and Michael Rye announcing, this weekly series continued on Mutual until February 14, 1945. It was followed by a thrice weekly series on a Mutual-Don Lee regional network in 1946, starring Jack Mather and Harry Lang, who continued to head the cast in the syndicated radio series of more than 600 episodes from 1947 to 1956.[2]

The radio episodes ended with one or the other of them making a corny joke about the adventure they had just completed. They would laugh, saying, “‘oh, Pancho!” “‘oh, Cisco!”, before galloping off, while laughing.[3]

Renaldo returned to the role for the popular 156-episode Ziv Television series The Cisco Kid (1950–1956), notable as the first TV series filmed in color.[4]

For the 1950s TV series, the Cisco Kid’s sidekick Pancho was portrayed by Leo Carrillo, riding a Palomino named Loco.

After a long absence, the character galloped back onto TV screens in the 1994 made-for-TV movie The Cisco Kid, starring Jimmy Smits with Cheech Marin as Pancho.

The TV episodes and the 1994 movie, like the radio series, ended with one or the other of them making a corny joke about the adventure they had just completed. They would laugh, saying, “‘O, Pancho!” “‘O, Cisco!”, before galloping off, while laughing, into the sunset. Spanish-styled Western theme music was heard as the credits rolled. Throughout the TV series, Pancho addressed Renaldo as “Cisco” – although that is the name of a town near Abilene, Texas, and the character’s real name is never mentioned – and others (mostly Anglo characters) refer to him as “the Kid” (Renaldo was 46 years old when the TV series began). Although both Pancho and Cisco are clearly identifiable as Mexicans, throughout the entire series they spoke to each other in English, with Pancho speaking a thickly accented and very tortured English, as if the two of them were not both fluent and comfortable in Spanish. Of course, the series was intended for initial release in the United States and for a primarily English-speaking audience so, as is still the practice today in such cases, the dialog was written and delivered in English and the audience filled in the rest.

The names Pancho and Cisco[edit]

“Cisco” and “Pancho” are both nicknames given to men whose Spanish name is Francisco, which in English is “Francis.” or Frank.

It is probable, but not clear, that Pancho or Cisco were originally named after the famous Mexican revolutionary general whose nom de guerre was <a class="mw-redirect" title="Francisco