This battle scene was painted in 1919 by artist Frank Schoonover. The scene depicts the bravery of Alvin C. York in 1918.

Alvin Cullum York (December 13, 1887 – September 2, 1964), known also by his rank, Sergeant York, was one of the most decorated soldiers of the United States Army in World War I.[1] He received the Medal of Honorfor leading an attack on a German machine gun nest, taking 35 machine guns, killing at least 28 German soldiers, and capturing 132 others. This action occurred during the United States-led portion of the broaderMeuse-Argonne Offensive in France to breach the Hindenburg line and make the opposing German forces surrender.

Alvin Cullum York was born in a two-room log cabin near Pall Mall, Tennessee.[2] He was the third of eleven children born to William Uriah York (15 May 1863 – 17 November 1911) and Mary Elizabeth (Brooks) York (1866-1943).[3][4] William Uriah York was born in Jamestown, Tennessee, to Uriah York and Eliza Jane Livingston, both travelers from Buncombe County, North Carolina.[5] Mary Elizabeth York was born in Pall Mall to William Brooks and Nancy Pile, and was the great-granddaughter of Conrad “Coonrod” Pile, an English settler who settled Pall Mall. William York and Mary Brooks married on December 25, 1881, and had eleven children. The York children were, in order: Henry Singleton, Joseph Marion, Alvin Cullum, Samuel John, Albert, Hattie, George Alexander, James Preston, Lillian Mae, Robert Daniel, and Lucy Erma.[5] The York family is of mainlyEnglish ancestry, with Scots-Irish ancestry as well.[6][7] The York family resided in the Indian Creek area of Fentress County.[5] The family was impoverished, with William York working as a blacksmith to supplement the family income. The men of the York family harvested their own food, while the mother made all the family clothing.[5] The York sons attended school for only nine months[2] and withdrew from education because William York wanted his sons to help him work the family farm and hunt small game to feed the family.[5] 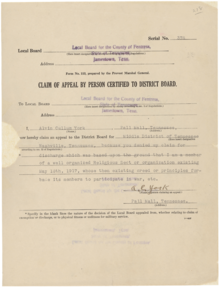 Claim of Appeal for conscientious objector status by Alvin York.

When William York died in November 1911, his son Alvin helped his mother in raising his younger siblings.[5]Alvin was the oldest sibling still residing in the county, since his two older brothers had married and relocated. To supplement the family income, York first worked in Harriman, Tennessee,[2] first in railroad construction and then as a logger. By all accounts, he was a very skilled worker who was devoted to the welfare of his family. York was also a violent alcoholic prone to fighting in saloons and accumulated several arrests within the area.[2] His mother, a member of a pacifist Protestant denomination, tried to persuade York to change his ways.[citation needed]

Despite his history of drinking and fighting, York attended church regularly and often led the hymn singing. Arevival meeting at the end of 1914 led him to a conversion experience on January 1, 1915. His congregation was the Church of Christ in Christian Union, a Protestant denomination that shunned secular politics and disputes between Christian denominations.[8] This church had no specific doctrine of pacificism but had been formed in reaction to the Methodist Episcopal Church, South‘s support for slavery, including armed conflict during the American Civil War, and opposed all forms of violence.[9] In a lecture later in life, he reported his reaction to the outbreak of World War I: “I was worried clean through. I didn’t want to go and kill. I believed in my Bible.”[10] On June 5, 1917, at the age of 29, Alvin York registered for the draft as all men between 21 and 31 years of age were required to do on that day. When he registered for the draft, he answered the question “Do you claim exemption from draft (specify grounds)?” by writing “Yes. Don’t Want To Fight.”[11] When his initial claim for conscientious objector status was denied, he appealed.[12]

In World War I, conscientious objector status did not exempt one from military duty. Such individuals could still be drafted and were given assignments that did not conflict with their anti-war principles. In November 1917, while York’s application was considered, he was drafted and began his army service at Camp Gordon in Georgia.[13]

From the day he registered for the draft until he returned from the war on May 29, 1919, York kept a diary of his activities. In his diary, York wrote that he refused to sign documents provided by his pastor seeking a discharge from the Army on religious grounds and refused to sign similar documents provided by his mother asserting a claim of exemption as the sole support of his mother and siblings. He also disclaimed ever having been a conscientious objector.[14]

York was drafted into the United States Army and served in Company G, 328th Infantry Regiment, 82nd Infantry Division atCamp Gordon, Georgia. Deeply troubled by the conflict between his pacifism and his training for war, he spoke at length with his company commander, Captain Edward Courtney Bullock Danforth (1894–1974) of Augusta, Georgia and his battalion commander, Major Gonzalo Edward Buxton (1880–1949) of Providence, Rhode Island, a devout Christian himself. Biblical passages about violence (“He that hath no sword, let him sell his cloak and buy one.” “Render unto Caesar …” “… if my kingdom were of this world, then would my servants fight.”) cited by Danforth persuaded York to reconsider the morality of his participation in the war. Granted a 10-day leave to visit home, he returned convinced that God meant for him to fight and would keep him safe, as committed to his new mission as he had been to pacifism.[13][15] He served with his Division in the St Mihiel Offensive.

The Germans got us, and they got us right smart. They just stopped us dead in our tracks. Their machine guns were up there on the heights overlooking us and well hidden, and we couldn’t tell for certain where the terrible heavy fire was coming from … And I’m telling you they were shooting straight. Our boys just went down like the long grass before the mowing machine at home. Our attack just faded out … And there we were, lying down, about halfway across [the valley] and those German machine guns and big shells getting us hard.

Under the command of Sergeant Bernard Early, four non-commissioned officers, including recently promoted Cpl. York,[18] and thirteen privates were ordered to infiltrate the German lines to take out the machine guns. The group worked their way behind the Germans and overran the headquarters of a German unit, capturing a large group of German soldiers who were preparing a counter-attack against the U.S. troops. Early’s men were contending with the prisoners when machine gun fire suddenly peppered the area, killing six Americans[19] and wounding three others.[20] The fire came from German machine guns on the ridge. The loss of the nine put Corporal York in charge of the seven remaining U.S. soldiers.[21] As his men remained under cover, guarding the prisoners, York worked his way into position to silence the German machine guns. York recalled:[22]

And those machine guns were spitting fire and cutting down the undergrowth all around me something awful. And the Germans were yelling orders. You never heard such a racket in all of your life. I didn’t have time to dodge behind a tree or dive into the brush… As soon as the machine guns opened fire on me, I began to exchange shots with them. There were over thirty of them in continuous action, and all I could do was touch the Germans off just as fast as I could. I was sharp shooting… All the time I kept yelling at them to come down. I didn’t want to kill any more than I had to. But it was they or I. And I was giving them the best I had.

During the assault, six German soldiers in a trench near York charged him with fixed bayonets. York had fired all the rounds in his M1917 Enfield rifle,[23] but drew his M1911 automatic pistol[24] and shot all six soldiers before they could reach him.[25]

German First Lieutenant Paul Jürgen Vollmer, commander of the First Battalion, 120th Landwehr Infantry, emptied his pistol trying to kill York while he was contending with the machine guns. Failing to injure York, and seeing his mounting losses, he offered in English to surrender the unit to York, who accepted.[26] By the end of the engagement, York and his seven men marched 132 German prisoners back to the American lines. Upon returning to his unit, York reported to his brigade commander, General Julian R. Lindsey, who remarked “Well York, I hear you have captured the whole damn German army.” York replied “No sir. I got only 132.” His actions silenced the German machine guns and were responsible for enabling the 328th Infantry to renew its attack to capture the Decauville Railroad.[27]

York was promptly promoted to Sergeant, and received the Distinguished Service Cross. A few months later, an investigation by York’s chain of command resulted in an upgrade of his Distinguished Service Cross to the Medal of Honor, which was presented by the commanding general of the American Expeditionary Forces,General John J. Pershing. The French Republic awarded him the Croix de Guerre and the Legion of Honour. When decorating York with the Croix de Guerre, Marshal Ferdinand Foch told York “What you did was the greatest thing ever accomplished by any soldier by any of the armies of Europe.”

After his platoon suffered heavy casualties and 3 other noncommissioned officers had become casualties, Cpl. York assumed command. Fearlessly leading seven men, he charged with great daring a machine gun nest which was pouring deadly and incessant fire upon his platoon. In this heroic feat the machine gun nest was taken, together with 4 officers and 128 men and several guns.

In attempting to explain his actions during the 1919 investigation that resulted in the Medal of Honor, York told General Lindsey “A higher power than man guided and watched over me and told me what to do.” Lindsey replied “York, you are right.”[31]