Supreme Court of the United States

The Court normally consists of the Chief Justice of the United States and eight associate justices who are nominated by the President and confirmed by the Senate. Once appointed, justices have life tenure unless they resign, retire, or are removed after impeachment (though no justice has ever been removed). In modern discourse, the justices are often categorized as having conservative, moderate, or liberal philosophies of law and of judicial interpretation. Each justice has one vote, and while many cases are decided unanimously, the highest profile cases often expose ideological beliefs that track with those philosophical or political categories. The Court meets in the United States Supreme Court Building in Washington, D.C.

Main article: History of the Supreme Court of the United States

The Court first convened on February 2, 1790,[3] by which time five of its six initial positions had been filled. According to historian Fergus Bordewich, in its first session: “[T]he Supreme Court convened for the first time at the Royal Exchange Building on Broad Street, a few steps from Federal Hall. Symbolically, the moment was pregnant with promise for the republic, this birth of a new national institution whose future power, admittedly, still existed only in the mind’s eye of a few farsighted Americans. Impressively bewigged and swathed in their robes of office, Chief Justice Jay and three associate justices— William Cushing of Massachusetts, James Wilson of Pennsylvania, and John Blair of Virginia— sat augustly before a throng of spectators and waited for something to happen. Nothing did. They had no cases to consider. After a week of inactivity, they adjourned until September, and everyone went home.”[4]

The sixth member (James Iredell) was not confirmed until May 12, 1790. Because the full Court had only six members, every decision that it made by a majority was also made by two-thirds (voting four to two).[5] However, Congress has always allowed less than the Court’s full membership to make decisions, starting with aquorum of four judges in 1789.[6]

Under Chief Justices Jay, Rutledge, and Ellsworth (1789–1801), the Court heard few cases; its first decision was West v. Barnes (1791), a case involving a procedural issue.[7] The Court lacked a home of its own and had little prestige,[8] a situation not helped by the highest-profile case of the era, Chisholm v. Georgia(1793), which was reversed within two years by the adoption of the Eleventh Amendment.[9] 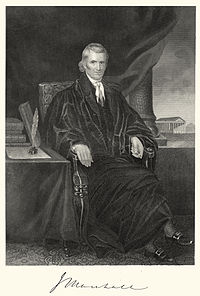 The Court’s power and prestige grew substantially during the Marshall Court (1801–1835).[10] Under Marshall, the Court established the power of judicial review over acts of Congress,[11] including specifying itself as the supreme expositor of theConstitution (Marbury v. Madison)[12][13] and made several important constitutional rulings giving shape and substance to thebalance of power between the federal government and the states (prominently, Martin v. Hunter’s Lessee, McCulloch v. Maryland and Gibbons v. Ogden).[14][15][16][17]

The Marshall Court also ended the practice of each justice issuing his opinion seriatim,[18] a remnant of British tradition,[19] and instead issuing a single majority opinion.[18] Also during Marshall’s tenure, although beyond the Court’s control, the impeachment and acquittal of Justice Samuel Chase in 1804–1805 helped cement the principle of judicial independence.[20][21]

The Taney Court (1836–1864) made several important rulings, such as Sheldon v. Sill, which held that while Congress may not limit the subjects the Supreme Court may hear, it may limit the jurisdiction of the lower federal courts to prevent them from hearing cases dealing with certain subjects.[22] Nevertheless, it is primarily remembered for its ruling in Dred Scott v. Sandford,[23] which helped precipitate the Civil War.[24] In the Reconstruction era, the Chase, Waite, and Fuller Courts (1864–1910) interpreted the new Civil War amendments to the Constitution[17] and developed the doctrine of substantive due process(Lochner v. New York;[25] Adair v. United States).[26]

Under the White and Taft Courts (1910–1930), the Court held that the Fourteenth Amendment had incorporated some guarantees of the Bill of Rights against the states (Gitlow v. New York),[27] grappled with the new antitrust statutes (Standard Oil Co. of New Jersey v. United States), upheld the constitutionality of military conscription (Selective Draft Law Cases)[28] and brought the substantive due process doctrine to its first apogee (Adkins v. Children’s Hospital).[29]

The Warren Court (1953–1969) dramatically expanded the force of Constitutional civil liberties.[34] It held that segregation in public schools violates equal protection(Brown v. Board of Education, Bolling v. Sharpe and Green v. County School Bd.)[35] and that traditional legislative district boundaries violated the right to vote (Reynolds v. Sims). It created a general right to privacy (Griswold v. Connecticut),[36] limited the role of religion in public school (most prominently Engel v. Vitale andAbington School District v. Schempp),[37][38] incorporated most guarantees of the Bill of Rights against the States—prominently Mapp v. Ohio (the exclusionary rule) and Gideon v. Wainwright (right to appointed counsel),[39][40]—and required that criminal suspects be apprised of all these rights by police (Miranda v. Arizona);[41] At the same time, however, the Court limited defamation suits by public figures (New York Times v. Sullivan) and supplied the government with an unbroken run of antitrust victories.[42]

The Burger Court (1969–1986) expanded Griswold’s right to privacy to strike down abortion laws (Roe v. Wade),[43] but divided deeply on affirmative action(Regents of the University of California v. Bakke)[44] and campaign finance regulation (Buckley v. Valeo),[45] and dithered on the death penalty, ruling first that most applications were defective (Furman v. Georgia),[46] then that the death penalty itself was not unconstitutional (Gregg v. Georgia).[46][47][48]

The Rehnquist Court (1986–2005) was noted for its revival of judicial enforcement of federalism,[49] emphasizing the limits of the Constitution’s affirmative grants of power (United States v. Lopez) and the force of its restrictions on those powers (Seminole Tribe v. Florida, City of Boerne v. Flores).[50][51][52][53][54] It struck down single-sex state schools as a violation of equal protection (United States v. Virginia), laws against sodomy as violations of substantive due process (Lawrence v. Texas),[55] and the line item veto (Clinton v. New York), but upheld school vouchers (Zelman v. Simmons-Harris) and reaffirmed Roe’s restrictions on abortion laws (Planned Parenthood v. Casey).[56] The Court’s decision in Bush v. Gore, which ended the electoral recount during the presidential election of 2000, was controversial.[57][58]

Article III of the United States Constitution leaves it to Congress to fix the number of justices. The Judiciary Act of 1789 called for the appointment of six justices, and as the nation’s boundaries grew, Congress added justices to correspond with the growing number of judicial circuits: seven in 1807, nine in 1837, and ten in 1863.

In 1866, at the behest of Chief Justice Chase, Congress passed an act providing that the next three justices to retire would not be replaced, which would thin the bench to seven justices by attrition. Consequently, one seat was removed in 1866 and a second in 1867. In 1869, however, the Circuit Judges Act returned the number of justices to nine,[66] where it has since remained.

President Franklin D. Roosevelt attempted to expand the Court in 1937. His proposal envisioned appointment of one additional justice for each incumbent justice who reached the age of 70 years 6 months and refused retirement, up to a maximum bench of 15 justices. The proposal was ostensibly to ease the burden of the docket on elderly judges, but the actual purpose was widely understood as an effort to pack the Court with justices who would support Roosevelt’s New Deal.[67] The plan, usually called the “Court-packing Plan“, failed in Congress.[68] Nevertheless, the Court’s balance began to shift within months when Justice van Devanterretired and was replaced by Senator Hugo Black. By the end of 1941, Roosevelt had appointed seven justices and elevated Harlan Fiske Stone to Chief Justice.[69]

Main article: Appointment and confirmation to the Supreme Court of the United States

The U.S. Constitution states that the President “shall nominate, and by and with the Advice and Consent of theSenate, shall appoint Judges of the Supreme Court.”[70] Most presidents nominate candidates who broadly share their ideological views, although a justice’s decisions may end up being contrary to a president’s expectations. Because the Constitution sets no qualifications for service as a justice, a president may nominate anyone to serve, subject to Senate confirmation.

In modern times, the confirmation process has attracted considerable attention from the press and advocacy groups, which lobby senators to confirm or to reject a nominee depending on whether their track record aligns with the group’s views. The Senate Judiciary Committee conducts hearings and votes on whether the nomination should go to the full Senate with a positive, negative or neutral report. The committee’s practice of personally interviewing nominees is relatively recent. The first nominee to appear before the committee wasHarlan Fiske Stone in 1925, who sought to quell concerns about his links to Wall Street, and the modern practice of questioning began with John Marshall Harlan II in 1955.[71] Once the committee reports out the nomination, the full Senate considers it. Rejections are relatively uncommon; the Senate has explicitly rejectedtwelve Supreme Court nominees, most recently Robert Bork in 1987.

Nevertheless, not every nominee has received a floor vote in the Senate. Although Senate rules do not necessarily allow a negative vote in committee to block a nomination, a nominee may be filibustered once debate has begun in the full Senate. No nomination for associate justice has ever been filibustered, but President Lyndon Johnson‘s nomination of sitting Associate Justice Abe Fortas to succeed Earl Warren as Chief Justice was successfully filibustered in 1968. A president may also withdraw a nomination before the actual confirmation vote occurs, typically because it is clear that the Senate will reject the nominee, most recently Harriet Miers in 2006.

Once the Senate confirms a nomination, the president must prepare and sign a commission, to which the Seal of the Department of Justice must be affixed, before the new justice can take office.[72] The seniority of an associate justice is based on the commissioning date, not the confirmation or swearing-in date.[73]

Before 1981, the approval process of justices was usually rapid. From the Truman through Nixon administrations, justices were typically approved within one month. From the Reagan administration to the present, however, the process has taken much longer. Some believe this is because Congress sees justices as playing a more political role than in the past.[74] According to the Congressional Research Service, the average number of days from nomination to final Senate vote since 1975 is 67 days (2.2 months), while the median is 71 days (or 2.3 months).[75][76]

When the Senate is in recess, a president may make temporary appointments to fill vacancies. Recess appointees hold office only until the end of the next Senate session (less than two years). The Senate must confirm the nominee for them to continue serving; of the two chief justices and six associate justices who have received recess appointments, only Chief Justice John Rutledge was not subsequently confirmed.[77]

No president since Dwight D. Eisenhower has made a recess appointment to the Court, and the practice has become rare and controversial even in lower federal courts.[78] In 1960, after Eisenhower had made three such appointments, the Senate passed a “sense of the Senate” resolution that recess appointments to the Court should only be made in “unusual circumstances.”[79] Such resolutions are not legally binding but are an expression of Congress’s views in the hope of guiding executive action.[79][80]