George Francis “Gabby” Hayes (May 7, 1885 – February 9, 1969) was an American radio, film, and television actor. He was best known for his numerous appearances in Western films as the colorful sidekick to the leading man.

Hayes was born the third of seven children in his father’s hotel in Stannards, New York, a hamlet just outside Wellsville, New York. (Hayes always gave Wellsville as his birthplace, but legally he was born in Stannards).[1][2] He was the son of Elizabeth Morrison and Clark Hayes, and the nephew of George F. Morrison, vice president of General Electric.[citation needed] Hayes did not come from a cowboy background; in fact, he did not know how to ride a horse until he was in his forties and had to learn for film roles.

His father, Clark Hayes, operated the Hayes Hotel in Stannards and was also involved in oil production. George Hayes grew up in Stannards and attended Stannards School.[2] He played semi-professional baseball while in high school, then ran away from home in 1902, at 17. He joined a stock company, apparently traveled for a time with a circus, and became a successful vaudevillian.

Hayes married Olive E. Ireland, daughter of a New Jersey glass finisher, on March 4, 1914. She joined him in vaudeville, performing under the name Dorothy Earle (not to be confused with film actress/writer Dorothy Earle). Hayes had become so successful that by 1928 he was able, at age 43, to retire to a home on Long Islandin Baldwin, New York. He lost all his savings the next year in the 1929 stock-market crash. Dorothy Earle convinced Hayes to try his luck in films, and the couple moved to Los Angeles. They remained together until her death on 5 July 1957. The couple had no children.

On his move to Los Angeles, according to later interviews, Hayes had a chance meeting with producer Trem Carr, who liked his look and gave him 30 roles over the next six years. In his early career, Hayes was cast in a variety of roles, including villains, and occasionally played two roles in a single film. He found a niche in the growing genre of Western films, many of which were series with recurring characters. Ironically, Hayes would admit he had never been a big fan of Westerns.[citation needed]

Hayes, in real life an intelligent, well groomed and articulate man, was cast as a grizzled codger who uttered phrases such as “consarn it”, “yer durn tootin'”, “dadgummit”, “durn persnickety female”, and “young whippersnapper.”

From 1935 to 1939, Hayes played the part of Windy Halliday, the sidekick to Hopalong Cassidy (played by William Boyd). In 1939, Hayes left Paramount Pictures in a dispute over his salary and moved to Republic Pictures. Paramount held the rights to the name Windy Halliday, so a new nickname was created for Hayes’ character, Gabby. As Gabby Whitaker, Hayes appeared in more than 40 films between 1939 and 1946, usually with Roy Rogers (44), but also with Gene Autry (7) and Wild Bill Elliott (14), often working under the directorship of Joseph Kane (34). 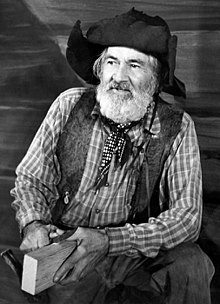 Hayes was also repeatedly cast as a sidekick to western icons Randolph Scott (six times) and John Wayne (15 times, some as straight or villainous characters). Hayes played Wayne’s sidekick in Raoul Walsh‘s Dark Command (1940), which featured Roy Rogers in a supporting role. Hayes became a popular performer and consistently appeared among the 10 favorite actors in polls taken of moviegoers of the period. He appeared in either one or both the Motion Picture Herald and Boxoffice Magazine lists of Top Ten Money-making Western Stars for 12 straight years and a 13th time in 1954, four years after his last film.

The Western film genre declined in the late 1940s, and Hayes made his last film appearance in The Cariboo Trail (1950). He moved to television and hosted The Gabby Hayes Show, a western series, from 1950 to 1954 on NBC, and a new version in 1956 on ABC. He introduced the show, often while whittling on a piece of wood, and would sometimes throw in a tall tale. Halfway through the show, he would say something else, and at the end of the show, also, but he did not appear as an active character in the stories themselves. When the series ended, Hayes retired from show business. He lent his name to a comic book series and to a children’s summer camp in New York. 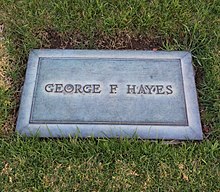 Following his wife’s death on July 5, 1957, he lived in and managed a 10-unit apartment building he owned in North Hollywood, California. In early 1969, he entered Saint Joseph Hospital in Burbank, California, for treatment of cardiovascular disease. He died there on 9 February 1969, at the age of 83. George “Gabby” Hayes was interred in the Forest Lawn – Hollywood Hills Cemetery in Los Angeles.

Homage was paid to Hayes in a different way in the 1974 satirical western Blazing Saddles. Actor-Director Jack Starrettcredited as Claude Ennis Starrett, Jr. played a Gabby Hayes-like character. In keeping with one running joke in the movie, the character was called Gabby Johnson. After he delivered a rousing, though largely unintelligible speech to the townspeople, David Huddleston‘s character proclaimed, “Now, who can argue with that?!” and proclaimed it as “authentic frontier gibberish.”[3]

In the animated film Toy Story 2, the character Stinky Pete the Prospector, voiced by Kelsey Grammer, is modeled after Hayes.[4] In the film’s fictional universe, he is a toy version of a character on the marionette television western Woody’s Roundup, where he is a colorful comic relief character. In contrast, the toy is intelligent and well spoken, a reference to Hayes’ contrasting real-life and film personas.

Hayes inspired the Doppio Rhum character in Captain Miki, an Italian comic series.[citation needed] Hayes has also been portrayed in impressions by Fred LaBour (Too Slim), during Riders in the Sky performances.[citation needed] In a Mighty Carson Art Players sketch on The Tonight Show, Johnny Carson impersonated Gabby Hayes in the sketch with guest star Roy Rogers. This sketch has appeared on Carson’s syndicated Carson’s Comedy Classics series that features highlights from his years as The Tonight Show host.

Gabby was mentioned in The Simpsons episode “Radioactive Man“, where Milhouse becomes Radioactive Man’s sidekick, “Fallout Boy“; the director of the film comments that Milhouse is “going to be big, Gabby Hayes big!”[citation needed]

Every year in early July, from 1983 through 1989, “Gabby Hayes Days” were celebrated in Wellsville, New York. The event featured a street sale, square dancing, and Gabby Hayes look-alike contests for adults and children. This celebration was eventually merged into the mid-July Wellsville Balloon Rally and gradually disappeared. A street is also named after him in Wellsville, Gabby Hayes Lane.[2][5][6]

The famous Manhattan restaurant Danny’s Hideaway at 151 East 45th Street called one of its main dining areas the Gabby Hayes Room in honor of the friendship between owner Dante “Danny” Stradella and Hayes.[7]