Kellyanne Elizabeth Conway (née Fitzpatrick; born January 20, 1967) is an American Republican campaign manager, strategist, and pollster. She is president and CEO of The Polling Company Inc./Woman Trend, and has been a regular political commentator on CNN, Fox News, Fox Business, and more. She has been a guest on shows such as Good Morning America, Real Time with Bill Maher, Meet the Press, and Hannity.

Kellyanne Elizabeth Fitzpatrick was born on January 20, 1967 in Camden, New Jersey to Diane Fitzpatrick.[3][4]Conway’s Irish father owned a small trucking company, and her Italian mother worked at a bank. They divorced when she was three.[5] She was raised in the Atco section of Waterford Township, New Jersey and graduated from St. Joseph High School in 1985.[6][3]

Conway credits her experience working for eight summers on a blueberry farm in Hammonton for teaching her a strong work ethic. “The faster you went, the more money you’d make.” At age 16 she won the New Jersey Blueberry Princess pageant. At 20, she won the World Champion Blueberry Packing competition. She states, “Everything I learned about life and business started on that farm.”[7] 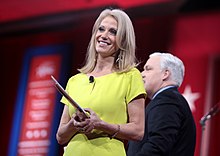 Conway has been featured frequently as a commentator on polling and the political scene, having appeared on ABC, CBS, NBC, PBS, CNN, MSNBC, NY1, and the Fox News Channel, in addition to various radio programs. She has received the Washington Post’s “Crystal Ball” award for accurately predicted elections.[8]

In August 2015, Conway became the president of the Keep the Promise I Super-PAC, which supported the 2016 presidential campaign of Texas senator Ted Cruzand was funded by hedge-fund executive Robert Mercer.[11] After Donald Trump won the Republican Presidential nomination, the PAC morphed into Make America Number 1, informally known as the “Defeat Crooked Hillary PAC”.[12]

On July 1, 2016, Trump announced that he hired Conway for a senior advisory position.[13] Conway was expected to advise Trump on how to better appeal to female voters.[13] Conway became the Trump campaign’s third campaign manager in August 2016.[9][14] This made her the first woman to run a Republican general election presidential campaign.[14] At the time, Trump was trailing Hillary Clinton by about ten percentage points in various opinion polls. Journalist Ryan Lizza credits Conway with closing the gap in the polls by improving Trump’s effectiveness while giving speeches, using language to appeal to voters and focusing speeches, such as when Trump described America as “a nation of strivers, dreamers, and believers.”[9] Trump ultimately won the presidential election, with Conway being credited for playing a major role in transforming Trump’s campaign and for appealing to female voters.[15] Trump will be inaugurated on January 20, 2017, which is also Conway’s 50th birthday.

Mass Connections, Inc. commissioned Conway’s research services to inform Volumes 1–3 of the Touch America series, including The Consumer Connection, The Shopper Connection, and Connecting with Consumers … IN STORE· ON LINE· IN LIFE.[16]

Conway is married to George T. Conway III, a litigation partner at the law firm Wachtell, Lipton, Rosen & Katz. The couple have four children and live in Alpine, New Jersey.[8][17] George Conway was an adviser to Paula Jones in her lawsuit against Bill Clinton.[18]