The European Central Bank is ready to temporarily step up purchases of Italian government bonds if the result of a crucial referendum on Sunday sharply drives up borrowing costs for the euro zone’s largest debtor, central bank sources told Reuters.

Italian government debt and bank shares have sold off ahead of the Dec. 4 referendum on constitutional reforms because of the risk of political turmoil. Opinion polls suggest the ‘No’ camp is heading for victory, which could force out Prime Minister Matteo Renzi in the latest upheaval against the ruling establishment sweeping the developed world.

The ECB could use its 80-billion-euro ($84.8 billion) monthly bond-buying programme to counter any immediate, further spike in bond yields after the vote, smoothing market moves and supporting bonds, according to four euro zone central bank sources who asked not to be named.

The preparations show that even though the proposed Italian reforms – such as reducing the powers of the upper house of parliament – have no relation to sovereign debt or economic policy, the fact Renzi has staked his premiership on the outcome of the vote has made it a flashpoint for financial markets.

Italian bond yields fell to a one-week low on Tuesday in response to the Reuters report.

The sources said the ECB bond-buying scheme was flexible enough to allow for a temporary increase in Italian purchases and that such a move would not necessarily need to be rubber-stamped by the ECB’s Governing Council, which is due to meet on Dec. 8 to decide on whether to keep buying bonds after March.

But they stressed this would be limited to days or weeks, to counter any immediate market volatility, because the asset-purchase programme was designed to shore up inflation and economic growth in the entire euro zone and was not intended to fight crises in individual countries.

This means that, if Italy or its banks needed longer-term financial support, Rome would need to formally ask for help.

“The Governing Council understands that there is some space to help Italy, which will be used, if needed. The asset purchase programme has built-in flexibility,” said one of the sources. “The key is that the ECB has to be convinced the volatility can be overcome by using this flexibility.”

With one of the world’s largest public debt piles, Italy’s borrowing costs are closely watched as a potential trigger for market instability in the wider euro zone.

They risked spiralling out of control during the sovereign debt crisis until ECB President Mario Draghi pledged in 2012 to do whatever it took to save the euro. 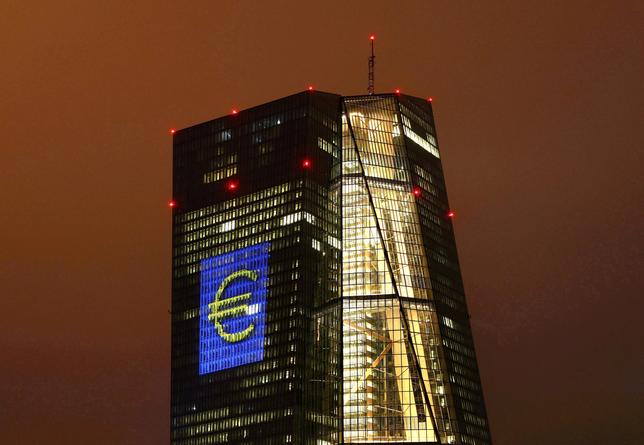 The headquarters of the European Central Bank (ECB) are illuminated with a giant euro sign at the start of the ”Luminale, light and building” event in Frankfurt, Germany, March 12, 2016. EUTERS/Kai Pfaffenbach/File Photo

Renzi has said he will resign if Italians reject his reforms, which would abolish the elected upper house Senate and replace it with a chamber of regional representatives with much reduced powers. The government is also proposing taking back some key decision-making powers from the regions.

Investors worry that his departure would lead to political instability and bolster the anti-establishment 5-Star Movement, which has called for a referendum on euro zone membership.

Draghi emphasised on Monday that Italy’s debt was sustainable, albeit with no room for complacency given its huge sovereign debt pile.

Vice President Vitor Constancio opened the door to an ECB intervention last week but also stressed that still-low Italian bond yields did not point to investor fears that the country may crash out of the euro zone.

Indeed, the health of Italian banks, rather than the governments’ own borrowing costs, may be Rome’s biggest worry in the aftermath of a ‘No’ vote.

Italy’s 10-year bond yields IT10YT=TWEB stand at 2 percent, the highest level in more than a year but nowhere near the 7 percent level that prompted emergency ECB purchases in 2010-11 and eventually led to the resignation of Prime Minister Silvio Berlusconi.

A Reuters poll of 32 analysts conducted on Nov 24-25 showed investors are likely to demand an extra 25 basis points in yield to hold benchmark Italian debt over its German equivalent if the reforms are rejected, with the euro dipping 1.25 percent.

Italian banks’ share prices indicate investors are concerned about their ability to raise the cash they need to work off their huge piles of unpaid loans, a legacy of the financial crisis that is hampering confidence in the sector and curbing economic growth.

Shares in Italian bank Monte dei Paschi di Siena (BMPS.MI) are near all-time lows over concerns it may fail to raise the 5 billion euros it needs as part of a rescue plan agreed with the ECB, which is also the euro zone’s banking supervisor.

The stock of larger peer UniCredit (CRDI.MI), which is also planning a cash call, is also close to a record low.

Big international investors are holding huge short positions on Italian assets, the CEO of the Italian exchange said on Tuesday.

Euro zone central bank sources say there is little the ECB can do about the banks’ need for capital unless Italy itself asks for a rescue programme for its banking sector.

This would also unlock further, country-specific ECB purchases of Italian debt, known as Outright Monetary Transactions (OMT). These, unlike the current asset-purchase programme, are not tied to the “capital key”, or how much capital each country has paid into the central bank.

“There is a risk that a bout of volatility would have a broader impact on the bank sector,” one of the sources said. “At that point, it’s not for the ECB to act. That’s typically where OMT needs to come in with all the requirements, including a (rescue) programme.”

Asking for such a programme has been an unpalatable option for Rome as it would require private investors in banks to lose their money in a so-called bail-in before European public funding can be used.

Iran, Iraq at loggerheads with Saudis ahead of OPEC meeting

VIENNA Iran and Iraq are resisting pressure from Saudi Arabia to curtail oil production, making it hard for the Organization of the Petroleum Exporting Countries to reach a deal to limit output and boost the price of crude when it meets on Wednesday.

Investors, including the state treasurers of Connecticut and Illinois, called on Wells Fargo & Co to require an independent board chair, saying the bank needs stronger oversight in the wake of a scandal over fake customer accounts.

George Bush Revealed Who He Voted For, And Surprised Everyone With Last Minute Change Of HeartTomorrowoman

This Mega-House is Arkansas’s Most Expensive (pics) Who Owns It Will Surprise YouNowBuzz.me

Use This Trick Every Time You Turn On Your PC….Scanguard Protection

37 Mob Photos That Will Make Your Skin CrawlHistoricalpast.com