After decades in the spotlight supporting her parents’ political endeavors, Chelsea Clinton is speaking out on her own.

While her parents spend their time under the radar, hiking and seeing Broadway shows, Chelsea has trained her fire on President Trump’s administration, using a method favored by the president himself: frequent, pointed tweets.

Shortly after the inauguration, Clinton defended 10-year-old Barron Trump against a sudden onslaught of attention — but not without taking a swipe at his father:

Barron Trump deserves the chance every child does-to be a kid. Standing up for every kid also means opposing @POTUS policies that hurt kids.

She made a sarcastic dig about the administration’s reported intention to repurpose a program countering all ideological violent extremism to one specifically focusing on Islamic extremism:

Because white supremacists & non-Muslim lone wolves less of a threat now? What evidence do we have that? Certainly not recent tragic history https://twitter.com/noahbarkin/status/827030329802231809 …

This is horrifying. We need more protection against campus sexual assault, more accountability & more support for survivors – not less https://twitter.com/adamserwer/status/827241451520143360 …

After the president signed an executive order denying citizens of seven Muslim-majority countries entrance to the U.S., she retweeted a message from Sen. Cory Booker, D-N.J., calling the move “utter villainy”:

And days later, during a New York rally against the immigration ban, she posted a picture of a sign addressing the president directly: 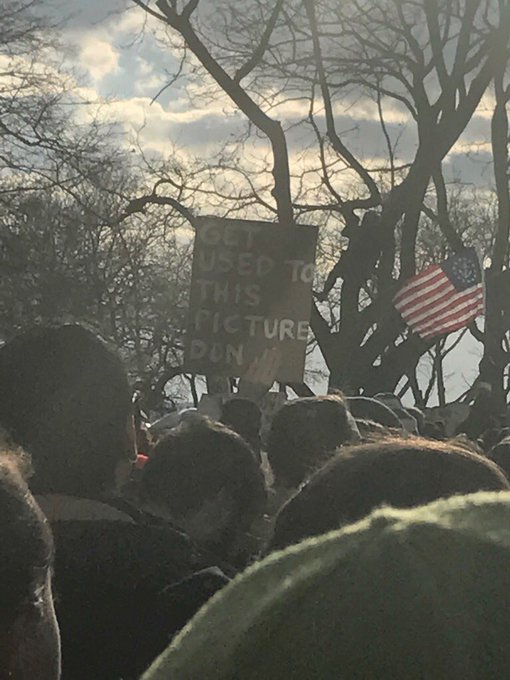 Yes. We will keep standing up for a country that matches our values and ideals for all.

Jabs sometimes come in the form of incredulity, as was the case when she commented on Trump’s remarks at a Black History Month event earlier this week. Trump had praised Frederick Douglass, a 19th-century abolitionist and statesman, as someone who has “done an amazing job and is being recognized more and more“:

On Friday, she took a swipe at Kellyanne Conway, who managed Trump’s campaign against her mother and now serves as one of the president’s most visible advisers. In an MSNBC interview Thursday, Conway cited the nonexistent “Bowling Green Massacre” as a defense for the ban.

Very grateful no one seriously hurt in the Louvre attack …or the (completely fake) Bowling Green Massacre. Please don’t make up attacks.

Clinton’s uptick in tweeting may be nothing more than her shedding the “polite politician’s daughter” role she has had practically since birth. But she is also rumored to be a potential political candidate down the road.

What to Read Next