An explosion Saturday night that rocked an area in downtown Los Angeles injured 11 firefighters who were responding to a major fire at a business that manufactures hash oil.

Los Angeles Fire Department Capt. Erik Scott said the “significant explosion” occurred after firefighters were called about 6 p.m. Saturday to the site of a fire at a commercial building on Boyd Street in the city’s Toy District. The firefighters who entered the building were looking for the nexus of the fire when the blast occurred, causing the flames to spread to nearby buildings, Scott told reporters near the scene. A distress call was sent after the explosion occurred, and about 230 other firefighters responded, setting up a triage area to treat their wounded comrades. Two hours after the initial call, the fire was put out.

3,834 people are talking about this

The blast and flames melted firefighters’ helmets, blackened a firetruck parked across the street and charred a ladder that firefighters had climbed to access the one-story commercial building, Scott said.

The cause of the fire is being investigated.

“This is a paramount concern to determine what caused this,” Scott said.

The injured firefighters are expected to survive, he said. Four were taken to the burn unit, and two of them were on ventilators, LAFD medical director Marc Eckstein said at a news conference Saturday night at the Los Angeles County-University of Southern California Medical Center, where the injured were being treated.

“Things could have been so much worse today,” he said, adding that there’s no evidence that the blast caused the injuries.

That may be because the officer in charge at the scene realized that the heat and pressure from the rear of the warehouse were increasing and ordered the firefighters to leave when the blast occurred, LAFD Chief Ralph Terrazas said at the briefing.

Witnesses said the coats of some of the firefighters were on fire as they ran out of the building, Terrazas said.

“We’ve been saying for the last two months, even more than usual, how much we appreciate our medical personal and first responders,” Los Angeles Mayor Eric Garcetti said at the briefing, referring to the coronavirus pandemic, “and, tonight, I’m doubly and deeply grateful for both of them.”

Tonight, 11 @LAFD firefighters were injured battling a blaze in downtown L.A. All of them are being treated for their injuries and in stable condition at this time. Our hearts go out to their loved ones and fellow first responders. We are keeping them in our prayers. 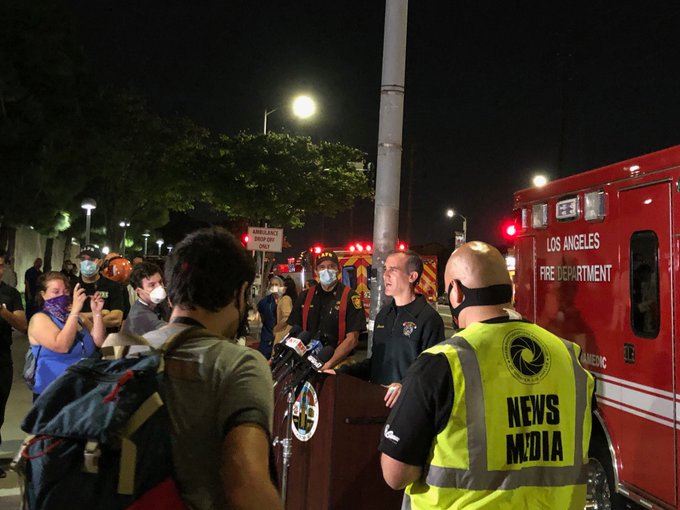 319 people are talking about this

The building that exploded housed the wholesale business Smoke Tokes, which Scott says makes “butane honey oil.” Butane, an odorless gas that easily ignites, is used in the process that creates hash oil with THC from cannabis. The oil is used in vaporizers, waxes and other products that the Smoke Tokes business retails on its website. Firefighters arriving at the scene saw canisters of butane on the street outside the building, Terrazas said.

The business didn’t immediately respond to a request for comment.

Get our Coronavirus Updates newsletter

Receive the most important pandemic developments in your inbox every day. All stories linked in the newsletter are free to access.